Professional Basketball Player for the Dallas Mavericks; Past NBA MVP

Dirk Nowitzki was born in Würzburg, Germany on June 19, 1978. He began his professional career with Würzburg DJK in the Bundesliga and then impressed NBA coaches and scouts with 33 points, 14 rebounds, and 3 steals at the 1998 Nike Hoop Summit. Consequently, Dirk became the ninth pick in the NBA draft, with an arranged trade that sent him from Milwaukee to Dallas.

Dirk owns multiple Mavericks franchise records, including career points, three-point field goals, free throws, rebounds, and points in a single game. He has led the Mavericks to seasons of 50 or more wins and annual trips to the playoffs since 2001. The 2005-2006 season resulted in an exciting playoff. Dirk played a major role in sweeping the Grizzlies, defeating San Antonio and the Suns, and winning the Western Conference Championship for Dallas’ first trip to the NBA Finals.

In 2006-2007, the Mavericks won a franchise record 67 games, and Dirk earned NBA Most Valuable Player honors—the first European player to win this award. In the 2008 – 2009 season Dirk became the franchise’s leading scorer when he earned his 16,644th point to pass Rolando Blackman.

In 2010 – 2011 season Dirk and the Mavericks reached their highest achievement to date with defeating Oklahoma City, Portland Trailblazers, sweeping the Lakers and in the NBA Final’s defeating Miami Heat 4-2. Dirk was named NBA Finals MVP.

Dirk is the highest-scoring foreign-born player in NBA-history, currently being ranked 7th in all-time scoring with over 28,000 regular-season points.

Dirk is a 13-time All Star, including the Rookie-Sophomore game, four three-point contests (first place in 2006), a 12-time All-NBA Team member, and the first European player to start in an All-Star Game as well as the first to receive the NBA Most Valuable Player Award (2007). In 2002, after leading Germany to the bronze medal in the FIBA World Championships, Dirk became Gazzetta dello Sport’s European Basketballer of the Year, an award he has won five times. Dirk was FIBA European Basketball Player of the Year in 2005, after helping Germany win the silver medal in the FIBA European Championships. Both times he was the leading scorer and MVP. In the 2007 FIBA European Championships, Germany fell short to automatically qualify for the Olympics so they entered the qualifying tournament and won a spot to in which the were accepted to the 2008 Olympics. Dirk lead the German basketball team to their first Olympics since1992 Summer Olympics. Dirk was chosen to be the flag bearer for the German Olympic Team at Opening Ceremony for the 2008 Olympics. Dirk led the German team to a tenth-place finish, and averaged 17.0 points, and 7.6 rebounds for the tournament.

In 2012, Dirk received the AmCham (American Chamber of Commerce) Germany TransAtlantic Partnership Award which honors active, examplary, and long-term initiatives by German or American individuals and institutions. Others who have received this award include Microsoft Founder Bill Gates, and Hasso Plattner, the founder of German software giant SAP AG.

Dirk takes his work seriously on the court, but he is also serious about making a difference off the court. Each year he makes hundreds of appearances and signs thousands of autographs in his desire to help children in our communities. In 2013, Dirk was named German ambassador for UNICEF with a focus to fight malnutrition in the world and promote a healthy lifestyle. “UNICEF helps us realize to what extent children need our support. However, UNICEF stands for solutions,” Dirk said after being appointed their new ambassador in Germany.

In December 2007, the NBA honored him with the NBA Community Assist Award in recognition of his outstanding efforts in the community and for his ongoing philanthropic work. Whether it is meeting children throughout the season for the Make-A-Wish Foundation or purchasing and delivering thousands of dollars worth of Christmas toys for children in a local hospital, Dirk loves to give back to children. He says, “Helping kids is one of the best things I get to do as a professional athlete, and it is a privilege to be a part of those events.”

Through the Dirk Nowitzki Foundation he awards grants annually to organizations focusing on children’s wellbeing, health and education, which runs true to the mission of his own foundation. With this he offers all of us an opportunity to help give positive experiences to children around the world.

Contact a speaker booking agent to check availability on Dirk Nowitzki and other top speakers and celebrities. 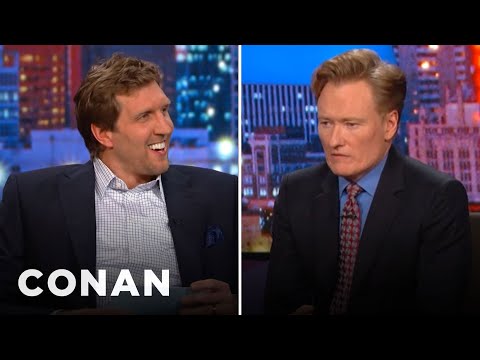 How to book Dirk Nowitzki?

Our booking agents have successfully helped clients around the world secure talent like Dirk Nowitzki for speaking engagements, personal appearances, product endorsements, or corporate entertainment for over 15 years. The team at All American Entertainment represents and listens to the needs of organizations and corporations seeking to hire keynote speakers, celebrities or entertainers. Fill out a booking request form for Dirk Nowitzki, or call our office at 1.800.698.2536 to discuss your upcoming event. One of our experienced agents will be happy to help you get pricing information and check availability for Dirk Nowitzki or any other celebrity of your choice.

How much does it cost to book Dirk Nowitzki?

Booking fees for Dirk Nowitzki, or any other speakers and celebrities, are determined based on a number of factors and may change without notice. Pricing often varies according to the circumstances, including the talent's schedule, market conditions, length of presentation, and the location of the event. Speaker fees listed on this website are intended to serve as a guideline only. In some cases, the actual quote may be above or below the stated range. For the most current fee to hire Dirk Nowitzki, please fill out the booking request form or call our office at 1.800.698.2536 to speak with an experienced booking agent.

Who is the agent for Dirk Nowitzki?

All American Entertainment has successfully secured celebrity talent like Dirk Nowitzki for clients worldwide for more than 15 years. As a full-service talent booking agency, we have access to virtually any speaker or celebrity in the world. Our agents are happy and able to submit an offer to the speaker or celebrity of your choice, letting you benefit from our reputation and long-standing relationships in the industry. Fill out the booking request form or call our office at 1.800.698.2536, and one of our agents will assist you to book Dirk Nowitzki for your next private or corporate function.

All American Speakers is a "buyers agent" and exclusively represents talent buyers, meeting planners and event professionals, who are looking to secure celebrities and speakers for personal appearances, speaking engagements, corporate entertainment, public relations campaigns, commercials, or endorsements. We do not exclusively represent Dirk Nowitzki or claim ourselves as the exclusive booking agency, business manager, publicist, speakers bureau or management for Dirk Nowitzki or any other speaker or celebrity on this website. For more information on how we work and what makes us unique, please read the AAE Advantage.

Dirk Nowitzki is a keynote speaker and industry expert who speaks on a wide range of topics . The estimated speaking fee range to book Dirk Nowitzki for your event is . Dirk Nowitzki generally travels from Dallas, TX, USA and can be booked for (private) corporate events, personal appearances, keynote speeches, or other performances. Similar motivational celebrity speakers are Viola Davis, Amy Poehler, Amy Schumer, Rashida Jones and Julia Louis-Dreyfus. Contact All American Speakers for ratings, reviews, videos and information on scheduling Dirk Nowitzki for an upcoming event.

Retired NBA Power Forward, Analyst on "Inside the NBA," One of the NBA's 50 Greatest Players of All Time

Professional basketball player; started the Steve Nash Foundation with its aim to instill health in kids.