Beginning his seventh season as Head Coach of the Golden State Warriors, Steve Kerr has guided the club through five of the most prolific seasons in NBA history with a list of accomplishments that includes three NBA championships, five-straight NBA Finals appearances, the NBA’s single-season wins record (73), an NBA Coach of the Year award (2015-16), and five of the six winningest seasons in franchise history. He owns an overall playoff record of 77-28 (.733), the highest winning percentage among NBA head coaches all-time that have coached a minimum of 25 postseason games. On April 19, 2018, Kerr earned his 50th playoff victory in just his 65th game, accomplishing the feat in fewer games than any coach in NBA history.

In October 2018, Kerr was named as an assistant coach on the 2019-20 USA Basketball Men’s National Team. Kerr, along with Indiana Pacers Head Coach Nate McMillan and Villanova University Head Coach Jay Wright, join the staff of USA and San Antonio Spurs Head Coach Gregg Popovich to complete the USA National Team coaching staff. The coaches led the USA National Team in 2019-20, which included the 2019 FIBA World Cup in China (Aug. 31-Sept. 15, 2019) and the upcoming 2021 Summer Olympic Games in Tokyo, Japan. Kerr was a member of the USA Basketball team that captured the 1986 World Championship title in Madrid, the last American men’s senior team composed strictly of amateur players to capture a gold medal. A finalist for the 1988 U.S. Olympic Basketball Team, Kerr was also a member of the 1988 USA Select Team that finished 6-0 during a European tour.

Kerr, who won five NBA championships during a 15-year playing career, now owns eight championships as either a player or coach, becoming the first to win at least three NBA titles as a player and three as a coach. Kerr is just the third coach in NBA history to win three championships in his first four seasons at the helm, joining Phil Jackson (1991, 1992, 1993) and John Kundla (1949, 1950, 1952) as the only coaches to do so.

In the 2017 postseason, Golden State posted a 16-1 (.941) record, the best single-season playoff record in league history that included a playoff-record 15-game win streak. In Kerr’s first three seasons on the bench, the Warriors became the first team in NBA history to win at least 65 games in three consecutive campaigns (67, 73, 67).

In 2014-15, Kerr engineered the most successful campaign of any first-year coach in NBA history en route to Golden State’s first title in 40 years, posting a then-franchise-record 67 victories and establishing NBA records for most wins and highest winning percentage (67-15, .817) by a first-year head coach. The Warriors saw a 16-game improvement in 2014-15 over the previous season (51-31 in 2013-14), an NBA record for the biggest improvement by a 50-win team in league history. Kerr followed his inaugural campaign by winning the 2015-16 NBA Coach of the Year Award for leading the Warriors to an NBA-record 73 regular-season wins in 2015-16 (73-9, .890), eclipsing the previous mark of 72 set by a Chicago Bulls squad in 1995-96 that featured Kerr in a reserve role. In addition to the single-season wins record, the Warriors set new league marks for single-season road wins (34), consecutive wins to begin a season (24) and consecutive regular-season home wins (54).

Kerr, 54, owns 30 years of NBA experience as a player, coach, television analyst and front office executive, including a three-year stint (2007-10) as president of basketball operations and general manager for the Phoenix Suns. During his time as the Suns GM, the club posted a 155-91 (.630) record and earned a pair of playoff berths, including a trip to the 2010 Western Conference Finals.

Having made the playoffs 11 times during his playing career, Kerr is one of only 26 players in NBA history to win five championships, earning three rings with Chicago and two with San Antonio. A key reserve for Chicago during the team’s three-peat championship run from 1996-98, Kerr famously hit the game-winning, title-clinching shot in Game 6 of the 1997 NBA Finals. He won his fourth consecutive championship in 1999 with the San Antonio Spurs to become one of only two non-Boston Celtics to win four-straight NBA titles (joining Frank Saul, 1951-54). His fifth ring came in his second stint with the Spurs during his final NBA campaign in 2002-03.

Kerr was originally selected by the Phoenix Suns in the second round (50th overall) of the 1988 NBA Draft out of the University of Arizona, where he capped his collegiate career as a senior in 1988 by helping lead the Wildcats to their first Final Four appearance. An All-Pac 10 guard in both 1986 and 1988, he remains the school’s career leader in three-point field goal percentage (57.3 percent).

During his playing career, Kerr played for some of the most successful coaches in the history of the game, including Phil Jackson, Popovich, Lenny Wilkens, Cotton Fitzsimmons and Lute Olson. Born in Beirut, Lebanon, and raised in Pacific Palisades, Calif., Kerr was a ballboy in 1978 and 1979 at UCLA, where his late father, Malcolm, was a professor.

As a broadcaster, Kerr has served two different four-year stints as a game analyst on TNT’s award-winning NBA coverage. In addition to a full slate of regular-season games, he also worked TNT’s marquee events, including the NBA All-Star Game, playoffs and conference finals. During his most recent stint in broadcasting, beginning in 2010, Kerr also served as an analyst for NCAA Tournament and Final Four coverage on Turner Sports and CBS.

Kerr earned a degree in general studies from Arizona with an emphasis in history, sociology and English in 1988 and advocates for gun control, supporting such organizations as the Brady campaign, Sandy Hook Promise, March for Our Lives, and Giffords. Kerr also helps fundraise for Oakland Promise, an initiative launched by Mayor Libby Schaaf and the Oakland Unified School District in 2016 that aims to triple the number of Oakland high school graduates who complete college by the year 2024. In October 2014, Steve and Margot Kerr committed $1 million to the University of Arizona to assist with the McKale Memorial Center renovation and future academic facility enhancements.

Born on September 27, 1965, Steve and his wife, Margot, have two sons, Nicholas and Matthew, and one daughter, Madeleine. Nick received his degree from the University of San Diego in 2015 and completed his graduate studies at the University of California, Berkeley, where he played as a walk-on for the Bears’ basketball team for one season. Nick is now an assistant video coordinator for the Warriors. Madeleine received her degree from UC Berkeley, where she was a member of the volleyball team, as is now a second-year law student there. Matthew is a senior at the USC School of Cinematic Arts.

Contact a speaker booking agent to check availability on Steve Kerr and other top speakers and celebrities. 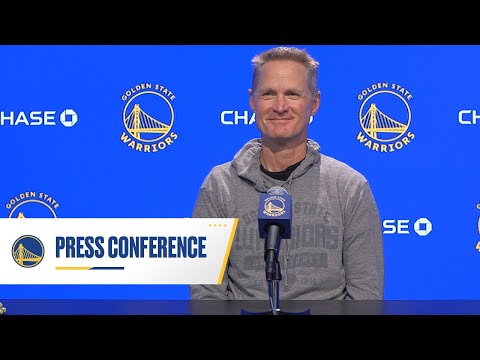 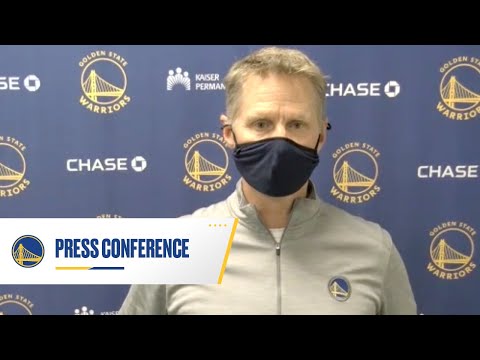 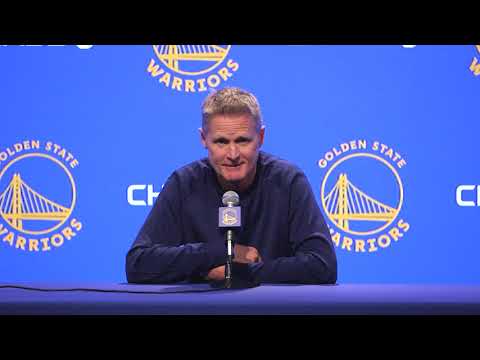 How to book Steve Kerr?

Our booking agents have successfully helped clients around the world secure talent like Steve Kerr for speaking engagements, personal appearances, product endorsements, or corporate entertainment for over 15 years. The team at All American Entertainment represents and listens to the needs of organizations and corporations seeking to hire keynote speakers, celebrities or entertainers. Fill out a booking request form for Steve Kerr, or call our office at 1.800.698.2536 to discuss your upcoming event. One of our experienced agents will be happy to help you get pricing information and check availability for Steve Kerr or any other celebrity of your choice.

How much does it cost to book Steve Kerr?

Booking fees for Steve Kerr, or any other speakers and celebrities, are determined based on a number of factors and may change without notice. Pricing often varies according to the circumstances, including the talent's schedule, market conditions, length of presentation, and the location of the event. Speaker fees listed on this website are intended to serve as a guideline only. In some cases, the actual quote may be above or below the stated range. For the most current fee to hire Steve Kerr, please fill out the booking request form or call our office at 1.800.698.2536 to speak with an experienced booking agent.

Who is the agent for Steve Kerr?

All American Entertainment has successfully secured celebrity talent like Steve Kerr for clients worldwide for more than 15 years. As a full-service talent booking agency, we have access to virtually any speaker or celebrity in the world. Our agents are happy and able to submit an offer to the speaker or celebrity of your choice, letting you benefit from our reputation and long-standing relationships in the industry. Fill out the booking request form or call our office at 1.800.698.2536, and one of our agents will assist you to book Steve Kerr for your next private or corporate function.

All American Speakers is a "buyers agent" and exclusively represents talent buyers, meeting planners and event professionals, who are looking to secure celebrities and speakers for personal appearances, speaking engagements, corporate entertainment, public relations campaigns, commercials, or endorsements. We do not exclusively represent Steve Kerr or claim ourselves as the exclusive booking agency, business manager, publicist, speakers bureau or management for Steve Kerr or any other speaker or celebrity on this website. For more information on how we work and what makes us unique, please read the AAE Advantage.

Steve Kerr is a keynote speaker and industry expert who speaks on a wide range of topics including Basketball, Inspirational and Sports Motivation. The estimated speaking fee range to book Steve Kerr for live events is $100,000 - $200,000, and for virtual events $100,000 - $200,000. Steve Kerr generally travels from Oakland, CA, USA and can be booked for (private) corporate events, personal appearances, keynote speeches, or other performances. Similar motivational celebrity speakers are Magic Johnson, Emmitt Smith and Pat Williams. Contact All American Speakers for ratings, reviews, videos and information on scheduling Steve Kerr for an upcoming event.

Pro Football Hall of Famer, Business Owner & Founder of the Dan Marino Foundation for Improving The Lives of Those on the Autism Spectrum