After moving to California from her native Chicago, and joining the famed Los Angeles Groundlings comedy improvisational troupe, Kathy began building her resume with guest starring roles on such series as "ER" and "Seinfeld" -- where she created recurring character Sally Weaver. In 1996, Kathy's dream of playing a sidekick on a sitcom came true when she landed the role of Vickie Groener, Brook Shields' sharp tongued colleague, on the NBC show "Suddenly Susan."

After her various TV guest spots, Kathy began gaining notice as a stand-up comedienne and landed her own "HBO Half Hour Comedy Special." In 1998, HBO gave Kathy her own one-hour special, "A Hot Cup of Talk." She participated in, and won "Celebrity Mole" on ABC, and then hosted the NBC reality series "Average Joe" as well as the MTV series, "Kathy's So-Called Reality." In 2010, Kathy took a dramatic turn on "Law and Order: SVU" where she riveted audiences with her portrayal of a lesbian activist with a secret.

Kathy has performed many successful stand-up specials for Bravo. The first in 2005 was called "Kathy Griffin...Is Not Nicole Kidman." Other specials include "Strong Black Woman," "Everybody Can Suck It," "Straight to Hell," "She'll Cut a Bitch," "Balls of Steel," "Kathy Griffin Does the Bible Belt," "Whores on Crutches," "50 and Not Pregnant," "Gurrl Down!," "Pants Off," "Tired Hooker," "Seaman 1st Class," "Kennedie Center On-Hers" and "Calm Down Gurrl."

In June 2008, Griffin released her first comedy album "For Your Consideration," which featured tracks such as "Straight Guys Wake Up!" and "Hi Barbara Walters." The album received a Grammy nomination for Best Comedy Album and garnered Kathy the acclaim of being the first female comedian ever to debut at No. 1 on the Billboard Top Comedy Albums chart. In 2009, Kathy released her first Christmas album called "Suckin' It for the Holidays." Kathy was again nominated for a Grammy in 2010 for Best Comedy Album for "Kathy Griffin Does the Bible Belt."

Kathy co-hosted The Billboard Music Awards three years in a row and hosted Bravo's A-List Awards two years in a row. She has appeared on numerous talk shows including "Late Night with David Letterman," "The Tonight Show with Jay Leno," "Howard Stern" and "The View" in addition to filling in for Larry King on "Larry King Live." From 2012 to 2013, Kathy hosted her own late-night talk show on Bravo, entitled "Kathy."

On the small screen she has guest starred on "Privileged," "Days of Our Lives" and "Ugly Betty." Other film credits include: "It's Pat," "Four Rooms," and "Hall Pass."

Kathy has supplied voices for characters on the animated series "Dilbert," "The Simpsons" and "Crank Yankers." Kathy also appeared on the "X-Files" as well as in Eminem's video, "The Real Slim Shady," which was co-directed by Dr. Dre. Kathy also supplied the voice of the Dancing Witch in the box office hit "Shrek Forever After."

On September 8, 2009, Kathy added best-selling author to her list of many achievements. Her tell-all autobiography entitled, "Official Book Club Selection: A Memoir According to Kathy Griffin," topped the New York Times Best Sellers List as well as The Wall Street Journal and Publishers Weekly lists.

Kathy is very involved with the gay and lesbian community and was presented with the prestigious Vanguard Award at the 2009 GLAAD Media Awards. The Trevor Project awarded Kathy with Lifetime Honoree at the 2011 gala for her tremendous work with the GLBTQ community. Kathy won the 2009 Gracie Award for Outstanding female lead in a Comedy Series. She was the 2007 GAVYN Awards Honorary Gay, the recipient of the 2006 Ladies Home Journal Funny Ladies We Love Award, and in 2005 she received the Lambda Legal Liberty Award. Other honors include 2003 Toys for Tots Commander's Award, Women's Night Special Comedic Award, Lucie Award, 2005 Aid for AIDS Friend of the Year and in 2007 was voted one of the Top 100 Irish Americans in Irish American Magazine. Kathy has also been nominated four years in a row for the Television Producer of the Year in Non-Fiction Television PGA Award.

Contact a speaker booking agent to check availability on Kathy Griffin and other top speakers and celebrities. 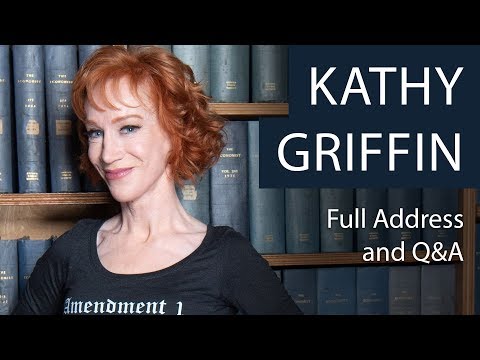 Official Book Club Selection: A Memoir According to Kathy Griffin

How to book Kathy Griffin?

Our booking agents have successfully helped clients around the world secure talent like Kathy Griffin for speaking engagements, personal appearances, product endorsements, or corporate entertainment for over 15 years. The team at All American Entertainment represents and listens to the needs of organizations and corporations seeking to hire keynote speakers, celebrities or entertainers. Fill out a booking request form for Kathy Griffin, or call our office at 1.800.698.2536 to discuss your upcoming event. One of our experienced agents will be happy to help you get pricing information and check availability for Kathy Griffin or any other celebrity of your choice.

How much does it cost to book Kathy Griffin?

Booking fees for Kathy Griffin, or any other speakers and celebrities, are determined based on a number of factors and may change without notice. Pricing often varies according to the circumstances, including the talent's schedule, market conditions, length of presentation, and the location of the event. Speaker fees listed on this website are intended to serve as a guideline only. In some cases, the actual quote may be above or below the stated range. For the most current fee to hire Kathy Griffin, please fill out the booking request form or call our office at 1.800.698.2536 to speak with an experienced booking agent.

Who is the agent for Kathy Griffin?

All American Entertainment has successfully secured celebrity talent like Kathy Griffin for clients worldwide for more than 15 years. As a full-service talent booking agency, we have access to virtually any speaker or celebrity in the world. Our agents are happy and able to submit an offer to the speaker or celebrity of your choice, letting you benefit from our reputation and long-standing relationships in the industry. Fill out the booking request form or call our office at 1.800.698.2536, and one of our agents will assist you to book Kathy Griffin for your next private or corporate function.

All American Speakers is a "buyers agent" and exclusively represents talent buyers, meeting planners and event professionals, who are looking to secure celebrities and speakers for personal appearances, speaking engagements, corporate entertainment, public relations campaigns, commercials, or endorsements. We do not exclusively represent Kathy Griffin or claim ourselves as the exclusive booking agency, business manager, publicist, speakers bureau or management for Kathy Griffin or any other speaker or celebrity on this website. For more information on how we work and what makes us unique, please read the AAE Advantage.

Kathy Griffin is a keynote speaker and industry expert who speaks on a wide range of topics . The estimated speaking fee range to book Kathy Griffin for your event is $50,000 - $200,000. Kathy Griffin generally travels from Los Angeles, CA, USA and can be booked for (private) corporate events, personal appearances, keynote speeches, or other performances. Similar motivational celebrity speakers are Viola Davis, Amy Poehler, Amy Schumer, Rashida Jones and Julia Louis-Dreyfus. Contact All American Speakers for ratings, reviews, videos and information on scheduling Kathy Griffin for an upcoming event.

Actor, Writer and Carpenter; Best Known for his Breakout Role as Ron Swanson on "Parks and Recreation"

Host of ABC's The Chew

Comedian, Entrepreneur and Host of "The Adam Carolla Radio Show"