From small-town Oklahoma native to internationally acclaimed actor and musician, Wes Studi credits his passion and multi-faceted background for his powerful character portrayals that forever changed a Hollywood stereotype.

Drawing from his rich life experience, Wes moved audiences with unforgettable performances in “Dances with Wolves,” “The Last of the Mohicans,” “Geronimo: An American Legend,” and “Heat,” as well as James Cameron’s “Avatar,” Paul Weitz’s “Being Flynn” and Scott Cooper’s “Hostiles.” Breaking new ground, he brought fully-developed Native American characters to the screen, and then took his craft a step further highlighting the success of Native Americans in non-traditional roles.

In 2019, Wes received the Academy of Motion Picture Arts and Sciences' Governors Award, an honorary Oscar statuette, given to honor extraordinary distinction in lifetime achievement.

In 2018, Wes, a Vietnam Veteran, was invited to present at the 90th Academy Awards. To a viewership of 26.5 million households, he introduced a video montage of military movies as a tribute to our veterans.

Wes was inducted in to the National Cowboy & Western Heritage Museum’s Hall of Great Western Performers in 2013. Throughout his 30-year career he’s won numerous awards, including several First Americans in the Arts awards and the 2009 Santa Fe Film Festival Lifetime Achievement Award.

Interestingly, acting was never a goal in Wes’ youth. Unlike many actors who dive into performing at an early age, he discovered acting later in life.

The eldest son of a ranch hand, Wes was born in 1947 in Nofire Hollow, in Northeastern Oklahoma. He spoke only his native Cherokee until he was 5, when he was enrolled in the Murrell Home to attend public school. He later attended the Chilocco Indian Boarding School in Northern Oklahoma, where he remained through high school graduation. Yet, unlike many fellow Native American students, he never forgot his language.

Wes joined the U.S. Army and while stationed at Fort Benning, Georgia, stories from returning Vietnam War veterans set his blood on fire. With only 12 months of his six-year service left, Wes volunteered to go to Vietnam. He served one tour in South Vietnam with the 9th Infantry Division in the Mekong Delta, living his own future war stories. At one point his company was pinned down in the Mekong Delta – and nearly killed – by friendly fire.

After an honorable military discharge, Wes returned home with a fire in the belly, and became seriously involved with Native American politics. He joined the American Indian Movement (AIM) and participated in the Trail of Broken Treaties protest march in 1972, where hundreds of Native American activists marched on Washington. He was one of the protesters who briefly occupied the Bureau of Indian Affairs Building there. In 1973, Wes participated in the occupation at Wounded Knee, South Dakota, for which he was arrested.

Wes now sees his political activism as a form of post-Vietnam catharsis. “I began to purge the bad feelings within myself,” he says, adding that he joined the resisters because “I wanted to make myself a viable part of the machinery that affected my people.”

Recognizing his current path could lead to self-destruction, Wes changed course and channeled his feelings toward positive change. Shortly after Wounded Knee, Wes moved to the Tahlequah, Oklahoma, where he worked for the Cherokee Nation, and helped start the Cherokee Phoenix, a bilingual newspaper still in publication today. During that time Wes put his linguistic skills to work and began teaching the Cherokee language in the community. Later attending Northeastern University in Tahlequah, he made further attempts at positive influence in his work with his people.

After college, Wes shifted his attention to running his own horse ranch and became a professional horse trainer. It was during this era that he began acting at The American Indian Theatre Company in Tulsa in 1983, where he found both the adrenaline rush he craved and the cathartic release he needed. “When you’re able to release those feelings in an acting form, it’s healthier than leaving them inside,” he says of discovering acting.

Wes first took the professional stage in 1984 with “Black Elk Speaks” and has never looked back. As his success grew on stage, he expanded to productions for Nebraska Public Television in the summer of 1985. Not long after, he moved to Los Angeles, landing his first film role in “Powwow Highway” and making his TV debut in a small role in the ABC TV-movie “Longarm” in 1988.

In 1990, Wes portrayed a terrifyingly memorable Pawnee warrior in “Dances with Wolves.” Two years later he landed the role of Magua in Michael Mann’s “The Last of the Mohicans,” the performance that put him on the map.

Wes drew on his own combat training, anger and sense of enforced isolation for his riveting depiction of the vengeful Magua. He soon became known for his film roles portraying strong Native American characters as he strove to portray them with poignancy and authenticity.

Wes went on to play the title character in the Walter Hill-directed film “Geronimo: An American Legend” (1993) alongside veteran actors Gene Hackman and Robert Duvall, for which he won a Western Heritage Award. He also made memorable appearances in such films as “Heat” (1995) as Al Pacino’s partner, “Deep Rising” (1998) and “Mystery Men” (1999). In 2002, he brought legendary character Lt. Joe Leaphorn to life for a series of PBS movies produced by Robert Redford and based on Tony Hillerman’s books “Skinwalkers,” “Coyote Waits,” and “A Thief of Time.”

In 2018, Wes was invited to present a tribute to military veterans at the 90th Academy Awards. During his presentation, he shared the following in his native Cherokee language: “Hello. Appreciation to all veterans & Cherokees who’ve served. Thank you!”

Wes remains a passionate activist and academic. He’s taken a national leadership role in the promotion and preservation of indigenous languages, acting as the spokesperson for the Santa Fe-based Indigenous Language Institute, and working as a language consultant on several films, including “Avatar” and the PBS documentary “We Shall Remain.” He’s also active in encouraging the next generation of filmmakers and performers, providing mentorship and participating in apprenticeship programs.

Wes and Maura live in Santa Fe, N.M. They have one son, Kholan. Wes also has a son, Daniel, and a daughter, Leah, from a previous marriage.

Contact a speaker booking agent to check availability on Wes Studi and other top speakers and celebrities. 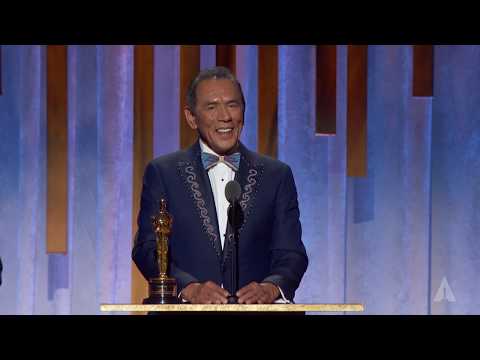 How to book Wes Studi?

Our booking agents have successfully helped clients around the world secure talent like Wes Studi for speaking engagements, personal appearances, product endorsements, or corporate entertainment for over 15 years. The team at All American Entertainment represents and listens to the needs of organizations and corporations seeking to hire keynote speakers, celebrities or entertainers. Fill out a booking request form for Wes Studi, or call our office at 1.800.698.2536 to discuss your upcoming event. One of our experienced agents will be happy to help you get pricing information and check availability for Wes Studi or any other celebrity of your choice.

How much does it cost to book Wes Studi?

Booking fees for Wes Studi, or any other speakers and celebrities, are determined based on a number of factors and may change without notice. Pricing often varies according to the circumstances, including the talent's schedule, market conditions, length of presentation, and the location of the event. Speaker fees listed on this website are intended to serve as a guideline only. In some cases, the actual quote may be above or below the stated range. For the most current fee to hire Wes Studi, please fill out the booking request form or call our office at 1.800.698.2536 to speak with an experienced booking agent.

Who is the agent for Wes Studi?

All American Entertainment has successfully secured celebrity talent like Wes Studi for clients worldwide for more than 15 years. As a full-service talent booking agency, we have access to virtually any speaker or celebrity in the world. Our agents are happy and able to submit an offer to the speaker or celebrity of your choice, letting you benefit from our reputation and long-standing relationships in the industry. Fill out the booking request form or call our office at 1.800.698.2536, and one of our agents will assist you to book Wes Studi for your next private or corporate function.

All American Speakers is a "buyers agent" and exclusively represents talent buyers, meeting planners and event professionals, who are looking to secure celebrities and speakers for personal appearances, speaking engagements, corporate entertainment, public relations campaigns, commercials, or endorsements. We do not exclusively represent Wes Studi or claim ourselves as the exclusive booking agency, business manager, publicist, speakers bureau or management for Wes Studi or any other speaker or celebrity on this website. For more information on how we work and what makes us unique, please read the AAE Advantage.

Wes Studi is a keynote speaker and industry expert who speaks on a wide range of topics . The estimated speaking fee range to book Wes Studi for your event is $20,000 - $30,000. Wes Studi generally travels from Santa Fe, NM, USA and can be booked for (private) corporate events, personal appearances, keynote speeches, or other performances. Similar motivational celebrity speakers are Viola Davis, Amy Poehler, Amy Schumer, Rashida Jones and Julia Louis-Dreyfus. Contact All American Speakers for ratings, reviews, videos and information on scheduling Wes Studi for an upcoming event.

Wes Studi receives an Honorary Award at the 2019 Governors Awards

Actor, Known for "The Magnificent Seven"

Actor Best Known for Playing Seth in "The Twilight Saga" & Warpath in "X-Men: Days of Futures Past"

Actor, Director & Producer Known for "Devil in a Blue Dress"

Director, Producer & Screenwriter; Known for "The Wood" and "Brown Sugar"

Actor, Known for "Law and Order: SVU" and "Cold Case"

British Actor & Screenwriter Known for "Get Out" & "Black Panther"

Actress, Dancer Known for "To All the Boys I've Loved Before"