Actor; Best Known for the Role of Frodo Baggins in the "Lord of the Rings" Trilogy

A professional actor since the age of nine, Elijah Wood is best known for the role of Frodo Baggins in the Lord of the Rings trilogy. He took the stage in his elementary school's rendition of the play The Sound of Music. The following year, he graduated to the title character of The Wonderful Wizard of Oz. Wood also served as choir boy during the production of See How They Run, produced by the Marion Creative Council.

Making his film debut with a minor part in Back to the Future II in 1989, Wood landed a succession of subsequent larger roles and became a critically acclaimed child actor. His performance in The War gained him a nomination by the YoungStar Awards (for which he was nominated five times and won once), and Roger Ebert said in his review of the film that "Elijah Wood has emerged, I believe, as the most talented actor in his age group in Hollywood history."

His role as Frodo in The Lord of the Rings made him a star, but he has thus far resisted typecasting by recently choosing less sympathetic roles, such as a stalker in Eternal Sunshine of the Spotless Mind and a mute cannibal in Sin City.

Wood modeled and did local commercials before moving with his family to Los Angeles in 1988. It was there that Wood got his first break, a small role in a Paula Abdul video. Film work almost instantly followed, with a bit part in the 1989 Back to the Future II. It was Wood's role as Aidan Quinn's son in Barry Levinson's 1990 Avalon (the third film in the Baltimore trilogy containing Diner [1982] and Tin Men [1987]) that first gave Wood attention, as the film received widespread critical acclaim and was nominated for four Academy Awards. After a small part in the Richard Gere potboiler Internal Affairs (1990), Wood secured his first starring role in Paradise (1991), in which he played a young boy who brings estranged couple Melanie Griffith and Don Johnson back together. He received good reviews for his performance -- some said it was one of the best things about the film -- and from there went on to co-star with Mel Gibson and Jamie Lee Curtis in Forever Young and in Radio Flyer (both 1992).

In 1993, Wood co-starred with Macaulay Culkin in The Good Son, which was a failure both at the box office and with filmgoers who couldn't stomach the idea of the little blond boy from Home Alone as a pre-teen psychopath. In casting Wood as the good to Culkin's evil, the film helped further establish the kind of characters Wood was to become known for: thoughtful, well meaning, and perhaps a bit confused. Wood's next film, the same year's The Adventures of Huck Finn, provided a departure from this type of character, but The War (1994) with Kevin Costner marked something of a return. Also in 1994, Wood had the title role in North, a film remarkable for the volume of bad reviews and bad box office it received, but also for the fact that practically every bad review contained a positive assessment of Wood's performance. Wood's follow-up, the 1996 Flipper, was hardly an improvement, but the subsequent critical and financial success of Ang Lee's The Ice Storm (1997) provided a positive development in the young actor's career. As the soulfully dazed and confused Mikey Carver, Wood gave a portrayal remarkable for its rendering of the thoughtfulness and exquisite hopelessness inherent in the character. 1998's Deep Impact and The Faculty did not allow Wood the same degree of character development, but were great financial successes and further stepping stones in Wood's evolution from winsome child star to impressive young actor.

Following a brief turn as the boyfriend of a wannabe hip-hop groupie in James Toback's problematic Black and White (1999), Wood further evolved as an actor in The Lord of the Rings: The Fellowship of the Ring, the first installation of director Peter Jackson's adaptation of J.R.R. Tolkien's Lord of the Rings trilogy. His most hotly anticipated project, the 2001 film gave Wood top billing as Frodo Baggins alongside a glittering cast that included Ian McKellen, Cate Blanchett, and Liv Tyler. That same year the young actor could be seen in less mystical surroundings courtesy of Ed Burns' Ash Wednesday, a crime drama that also featured Oliver Platt and Rosario Dawson. In 2002, Wood let his vocal chords for Disney's straight-to-video release of The Adventures of Tom Thumb and Thumbelina. Of course, his most substantial role of 2002 is unarguably his return to the role of hobbit Frodo Baggins in the second installment of Tolkien's Lord of the Rings trilogy; specifically, The Lord of the Rings: The Two Towers.

2003 proved to be a similar year for Wood -- after two relatively small jobs (his role credited as "The Guy" in Spy Kids 3-D: Game Over and his stint as First Assistant Director in Sean Astin's The Long and Short of It served purely as a break for Elijah), the young actor once again resumed his role for The Lord of the Rings: The Return of the King. Though Return of the King is the last in the Tolkien trilogy

Hot on the heels of the trilogy, Wood quickly appeared in his first non-Frodo role in the off-kilter but highly effective Eternal Sunshine of the Spotless Mind (2004), playing an ethically challenged lab technician who helps erase heartbreaking memories but then uses his knowledge of an unknowing former patient's played by Kate Winslet past relationship to woo her. He then had a chillingly silent turn as the cannibalistic, bespectacled serial killer Kevin in director Robert Rodriguez and writer-artist Frank Miller's visually arresting adaptation of Miller's crime noir comic book series Sin City (2005), appearing opposite Mickey Rourke in the segment The Hard Goodbye.

His latest work includes Everything Is Illuminated written and directed by Liev Schreiber, adapted from the novel by Jonathan Safran Foer, and Green Street Hooligans, directed by Lexi Alexander.

He completed filming the independent Emilio Estevez film, Bobby in December 2005 alongside Anthony Hopkins, Demi Moore, Sharon Stone and Lindsay Lohan. His next projects include Day Zero, a drama about the draft with Chris Klein and Ginnifer Goodwin, and Vamp with Elisha Cuthbert that he will be filming in July 2006 (but not yet confirmed). Wood leads the cast of the animated movie Happy Feet which will be release in November 17, also stars Nicole Kidman, Hugh Jackman, Brittany Murphy and Robin Williams. Recent news reports, confirmed by Wood, have cited his plans to portray Iggy Pop in a biopic on the singer's life, slated to begin production in 2006.

Wood's new film, Set Fire to the Stars, tells the true story of an aspiring poet who goes on a weeklong retreat with his hero, Dylan Thomas.

Contact a speaker booking agent to check availability on Elijah Wood and other top speakers and celebrities. 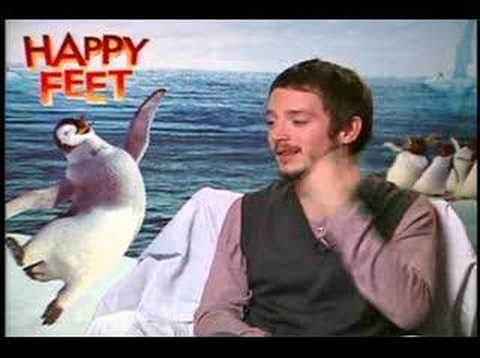 How to book Elijah Wood?

Our booking agents have successfully helped clients around the world secure talent like Elijah Wood for speaking engagements, personal appearances, product endorsements, or corporate entertainment for over 15 years. The team at All American Entertainment represents and listens to the needs of organizations and corporations seeking to hire keynote speakers, celebrities or entertainers. Fill out a booking request form for Elijah Wood, or call our office at 1.800.698.2536 to discuss your upcoming event. One of our experienced agents will be happy to help you get pricing information and check availability for Elijah Wood or any other celebrity of your choice.

How much does it cost to book Elijah Wood?

Booking fees for Elijah Wood, or any other speakers and celebrities, are determined based on a number of factors and may change without notice. Pricing often varies according to the circumstances, including the talent's schedule, market conditions, length of presentation, and the location of the event. Speaker fees listed on this website are intended to serve as a guideline only. In some cases, the actual quote may be above or below the stated range. For the most current fee to hire Elijah Wood, please fill out the booking request form or call our office at 1.800.698.2536 to speak with an experienced booking agent.

Who is the agent for Elijah Wood?

All American Entertainment has successfully secured celebrity talent like Elijah Wood for clients worldwide for more than 15 years. As a full-service talent booking agency, we have access to virtually any speaker or celebrity in the world. Our agents are happy and able to submit an offer to the speaker or celebrity of your choice, letting you benefit from our reputation and long-standing relationships in the industry. Fill out the booking request form or call our office at 1.800.698.2536, and one of our agents will assist you to book Elijah Wood for your next private or corporate function.

All American Speakers is a "buyers agent" and exclusively represents talent buyers, meeting planners and event professionals, who are looking to secure celebrities and speakers for personal appearances, speaking engagements, corporate entertainment, public relations campaigns, commercials, or endorsements. We do not exclusively represent Elijah Wood or claim ourselves as the exclusive booking agency, business manager, publicist, speakers bureau or management for Elijah Wood or any other speaker or celebrity on this website. For more information on how we work and what makes us unique, please read the AAE Advantage.

Elijah Wood is a keynote speaker and industry expert who speaks on a wide range of topics . The estimated speaking fee range to book Elijah Wood for your event is $75,000 - $200,000. Elijah Wood generally travels from Austin, TX, USA and can be booked for (private) corporate events, personal appearances, keynote speeches, or other performances. Similar motivational celebrity speakers are Viola Davis, Amy Poehler, Amy Schumer, Rashida Jones and Julia Louis-Dreyfus. Contact All American Speakers for ratings, reviews, videos and information on scheduling Elijah Wood for an upcoming event.

Actor, Best-Known for "This Is Us"

Actor Known for "Parks & Recreation" & "Guardians of the Galaxy"