With rugged looks and an imposing presence, Christopher Meloni frequently found himself cast in tough guy roles, but when given the chance the actor displayed surprising range, particularly in comedy. Meloni broke in via television and eventually began landing bit parts in feature films like "Clean Slate," "Junior" and "12 Monkeys." Meloni all but cemented his stature as a Mafia-type thug with his vicious performance in the sexually-charged thriller "Bound," which was followed by similarly brutish parts in series such as "NYPD Blue" and the miniseries "The Last Don." By the end of the decade, however, Meloni took on two equally intense roles as characters who could not have been more diametrically opposed to each other. On "Oz," Meloni gave a chilling performance as serial killer Chris Keller, and shortly thereafter he joined the cast of "Law & Order: Special Victims Unit" as Detective Elliot Stabler, a cop who tirelessly pursued perpetrators of the most heinous sexual crimes. As much as he would be known for his dramatically intense performances, Meloni would prove himself capable of delivering huge belly laughs with gut-busting cameos in films such as "Harold & Kumar Go to White Castle." Though he left "SVU" after 12 seasons in 2011, Meloni always found himself in the enviable position of being able to work in both drama and comedy with equal facility.

Born Christopher Peter Meloni on April 2, 1961 in Washington, D.C. to parents Robert, a successful endocrinologist, and Cecile, a proud homemaker, Meloni grew up in the nation's capital prior to attending the University of Colorado. Upon earning his bachelor's degree in history in 1983, he returned to the D.C. area, working in construction for a time, before pursuing acting. Meloni relocated to New York City, where he apprenticed at the famed Neighborhood Playhouse while earning a living as a bouncer at various clubs. During that period he took part in several obscure, off-Broadway productions and managed to land occasional television work, with a small recurring role on the daytime soap "Search for Tomorrow," as well as a brief appearance in an episode of the crime drama "The Equalizer." With a more substantial returning part as ex-con turned quarterback, Johnny Gunn in the 5th season installment of the NFL comedy "1st & 10: Do It Again," Meloni's career began to gain traction. Then Meloni won the role of skirt-chasing man-child Frankie Fanelli, one of the titular brothers in the comedy, "The Fanelli Boys." He followed that series up with a featured role in the TV movie "When Will I Be Loved," a co-starring turn in the miniseries "In a Child's Name," and two seasons of recurring voice work as the wise-cracking Spike for the live-action/puppetry anomaly "Dinosaurs."

Meloni had a co-starring role in "Without a Kiss Goodbye," as the loyal husband of Laurie Samuels (Lisa Hartman Black), a woman wrongly convicted of poisoning her infant son. The following year, he also made the jump to the big screen with small parts in two feature films -- the Dana Carvey amnesia comedy "Clean Slate" and "Junior," starring Arnold Schwarzenegger as a research scientist who accidentally becomes pregnant. Meloni also had the good fortune to make a brief appearance in the Terry Gilliam-directed "12 Monkeys," an apocalyptic sci-fi thriller starring Bruce Willis as a man sent back in time to prevent the extinction of mankind. He was able to flex a little more muscle as the brutish Mafia scion Johnny Marzonne in the neo-noir "Bound," written and directed by the Wachowski Brothers. The erotic crime thriller starred Jennifer Tilly and Gina Gershon as a pair of femme fatales who first become lovers, and then partners in crime. Although he ran the risk of being typecast, Meloni continued to accept tough guy roles, including a recurring turn as the vicious gun dealer, Jimmy Liery, on the long-running Steven Bochco procedural, "NYPD Blue," as well as a recurring role on another Bochco production, "Brooklyn South." A role in a similar vein came his way with the miniseries "Mario Paso's 'The Last Don,'" in which he received positive notices for his intense portrayal of Darryl Hannah's sadistic ex-husband. Meloni also made a small, but utterly hilarious impact as a take-no-guff gay hotel clerk in "Fear and Loathing in Las Vegas," starring Johnny Deep and directed once again by Terry Gilliam.

Around this time, things began to pick up for Meloni when he joined the cast of the award-winning prison drama "Oz." As inmate Chris Keller, a serial killer whose passions and brutality frequently endangered even those closest to him, Meloni received almost unanimous praise from critics and fans alike. There was also a 1998 turn as a bounty hunter in a two-part episode of the critically acclaimed crime drama "Homicide: Life on the Street." That same year, the actor also re-teamed with "Oz" co-star Rita Moreno for the indie family comedy "Carlo's Wake." A higher profile, but less challenging role as the jilted fiance in the Julia Roberts-Richard Gere romantic comedy "Runaway Bride" preceded what would be Meloni's biggest role up to that point in his career. As the hot-tempered, driven Detective Elliot Stabler on "Law & Order: Special Victims Unit" Meloni would garner a legion of fans for his committed portrayal of the passionate cop, earning himself a 2006 Emmy nomination for Best Actor. As with many of the more popular characters in the "Law & Order" universe, Stabler made crossover appearances on the original series and its spin-offs, including "Law & Order: Trial by Jury." As busy as he was, Meloni still managed to find time to appear in projects such as the little-known summer camp comedy "Wet Hot American Summer," co-starring Janeane Garafolo and Paul Rudd, and the TV movie "Dominick Dunne Presents: Murder in Greenwich" as controversial former-detective Mark Fuhrman.

Even as the usually grim "Law & Order: SVU" continued its long run, Meloni took rare opportunities to work his funny bone with hilarious cameos in the medical comedy "Scrubs" in 2003, and was barely recognizable in the raunchy "Harold & Kumar Go to White Castle" as the insane "Freakshow." In the mawkish "Nights in Rodanthe," Meloni had the thankless task of playing the philandering husband of Diane Lane, once again losing the girl to Richard Gere. He had a bit of silly fun as Coach Davie Stewie, a humiliated one-time Olympic hopeful desperate to recapture his glory via his middle school students in "Gym Teacher." The following year, he appeared in two long-delayed films, the apocalyptic teen horror movie "Carriers" and the John Krasinski-directed "Brief Interviews with Hideous Men," based on the novel by David Foster Wallace. Meanwhile, Meloni ended his run on "SVU" after 12 seasons in order to pursue other projects, stating that he had a great run and left the show with promises of appearing as a guest star in the future. He moved on to a prominent recurring role on "True Blood" as Roman Zimojic, an ancient vampire and Guardian of the blood of Lilith who is staked by Russell (Denis O'Hare) at the end of the fifth season.

Meloni stars in the upcoming FOX series "Surviving Jack," based on Justin Halpern's book "I Suck at Girls." The show is set in the 1990s and follows the relationship between a teenage boy and his aloof dad.

Contact a speaker booking agent to check availability on Christopher Meloni and other top speakers and celebrities. 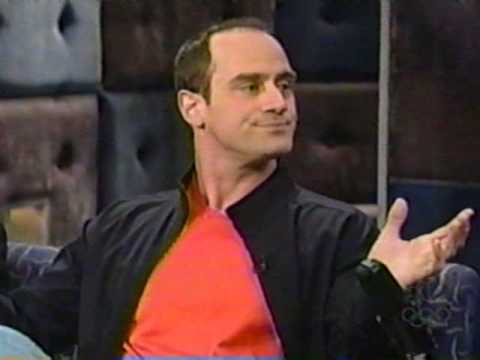 How to book Christopher Meloni?

Our booking agents have successfully helped clients around the world secure talent like Christopher Meloni for speaking engagements, personal appearances, product endorsements, or corporate entertainment for over 15 years. The team at All American Entertainment represents and listens to the needs of organizations and corporations seeking to hire keynote speakers, celebrities or entertainers. Fill out a booking request form for Christopher Meloni, or call our office at 1.800.698.2536 to discuss your upcoming event. One of our experienced agents will be happy to help you get pricing information and check availability for Christopher Meloni or any other celebrity of your choice.

How much does it cost to book Christopher Meloni?

Booking fees for Christopher Meloni, or any other speakers and celebrities, are determined based on a number of factors and may change without notice. Pricing often varies according to the circumstances, including the talent's schedule, market conditions, length of presentation, and the location of the event. Speaker fees listed on this website are intended to serve as a guideline only. In some cases, the actual quote may be above or below the stated range. For the most current fee to hire Christopher Meloni, please fill out the booking request form or call our office at 1.800.698.2536 to speak with an experienced booking agent.

Who is the agent for Christopher Meloni?

All American Entertainment has successfully secured celebrity talent like Christopher Meloni for clients worldwide for more than 15 years. As a full-service talent booking agency, we have access to virtually any speaker or celebrity in the world. Our agents are happy and able to submit an offer to the speaker or celebrity of your choice, letting you benefit from our reputation and long-standing relationships in the industry. Fill out the booking request form or call our office at 1.800.698.2536, and one of our agents will assist you to book Christopher Meloni for your next private or corporate function.

All American Speakers is a "buyers agent" and exclusively represents talent buyers, meeting planners and event professionals, who are looking to secure celebrities and speakers for personal appearances, speaking engagements, corporate entertainment, public relations campaigns, commercials, or endorsements. We do not exclusively represent Christopher Meloni or claim ourselves as the exclusive booking agency, business manager, publicist, speakers bureau or management for Christopher Meloni or any other speaker or celebrity on this website. For more information on how we work and what makes us unique, please read the AAE Advantage.

Christopher Meloni is a keynote speaker and industry expert who speaks on a wide range of topics . The estimated speaking fee range to book Christopher Meloni for your event is $50,000 - $75,000. Christopher Meloni generally travels from Los Angeles, CA, USA and can be booked for (private) corporate events, personal appearances, keynote speeches, or other performances. Similar motivational celebrity speakers are Viola Davis, Amy Poehler, Amy Schumer, Rashida Jones and Julia Louis-Dreyfus. Contact All American Speakers for ratings, reviews, videos and information on scheduling Christopher Meloni for an upcoming event.

Star of Tyler Perry's "The Haves and Have Nots" on OWN

Comedian & Actor; Known for His Roles in "The Office" and "Silicon Valley"

British Actor, Best Known for His Role in Showtime's "Homeland" and "Billions"

Host of ABC's The Chew

Host of HGTV's "Sweat Equity"; Co-Founder of Now She Rises