Braden Holtby (born September 16, 1989) is a Canadian professional ice hockey goaltender currently playing for the Washington Capitals of the National Hockey League (NHL). He was selected in the fourth round, 93rd overall, by the Capitals in the 2008 NHL Entry Draft.

Holtby spent his junior career with the Saskatoon Blades of the Western Hockey League (WHL). The Blades struggled through his first two seasons with the team, and Holtby managed only 42 wins in 115 games. However, in his last WHL season, after being drafted by the Capitals in the fourth round of the 2008 NHL Entry Draft, Holtby nearly equaled his wins total from the previous two seasons, posting a much-improved 40 wins in 61 games.

In 2009, Holtby made the jump to professional hockey and split the season between the ECHL's South Carolina Stingrays and the Hershey Bears of the American Hockey League (AHL). He posted an impressive 24 wins in 37 games for the Bears, with a 2.32 goals against average (GAA) and .917 save percentage. He won seven of 12 games with the Stingrays, and represented South Carolina in that season's ECHL All-Star Game.

Holtby made his NHL debut on November 5, 2010, against the Boston Bruins at the Verizon Center. After replacing Michal Neuvirth with ten minutes remaining and the game tied 3–3, Holtby stopped four Bruins shots as the Capitals scored two goals to give him the win. Holtby made his first NHL start two days later against the Philadelphia Flyers, a game the Capitals won 3–2 in overtime. Holtby recorded his first NHL shutout on March 9, 2011, stopping 22 shots in a 5–0 victory over the Edmonton Oilers. After posting a 4–0–0 record, a 1.05 GAA and a .965 save percentage, Holtby was named the NHL's First Star of the Week for the week ending March 13, 2011. On March 27, 2011, Holtby was assigned to Hershey, despite a 10–2–2 record in 14 starts.

He returned on the last game of the 2011–12 season due to starter Tomáš Vokoun's and backup Michal Neuvirth's injuries for the Capitals. Holtby started Game 1 of the 2012 Stanley Cup playoffs against the Boston Bruins, saving 29 of 30 shots in a 1–0 overtime loss. In Game 2, Holtby stopped 43 of 44 shots in a 2–1 double overtime win to tie the series at 1–1. Washington Head Coach Dale Hunter decided to start Holtby for the next game, even though Neuvirth and Vokoun would be available in the playoffs, stating, "Holtby's our goalie." Holtby went on to aid the Capitals in upsetting the second seeded Bruins, stopping all but one of the shots he faced in a Game 7 to beat the Bruins 2–1 in overtime. He continued his sensational play against the top-seeded New York Rangers, splitting two road games in New York and stopping all shots he faced until late in a triple overtime game that saw the Capitals fall 2–1. Holtby continued his impressive goaltending by beating the Rangers in Game 4 to tie the series at 2–2. However, he was not as stellar in Game 5, allowing the game-tying goal with 6.6 seconds left in the game and then giving up the losing goal in overtime. After the game, Holtby stated, "I didn't see a thing." After the loss, Holtby rebounded by making 30 saves in Game 6, with the Capitals winning 2–1 and forcing the decisive Game 7. On May 12, Holtby started in his second career Game 7. One minute and 32 seconds into the game, Brad Richards of the Rangers blasted a slap shot past Holtby, making the score 1–0 early in. Holtby was able to shake it off, however, and play a solid game, finishing with 29 saves, though the Capitals were ultimately unable to beat the Rangers in the final period, losing Game 7.

After his impressive playoff performances as a rookie, Holtby was rewarded with the starting goaltender's job for the 2012–13 season, as named by Washington's new head coach, Adam Oates. On February 25, 2013, just over a month after the lockout-shortened season commenced, Holtby agreed to a two-year, $3.7 million contract extension with the Capitals.

On April 8, 2015, Holtby shut-out the Boston Bruins, 3–0, and having already shut-out Boston in his previous two games in the 2014–15 season, he became the first goaltender to ever perform a season-sweep of three or more games against Boston without a single goal allowed. This victory would also give him 41 wins on the season, tying him with Olaf Kölzig for most in a single season in Capitals history. On May 4, 2015, Holtby shut-out the New York Rangers, 1–0, to capture a 2–1 playoff lead in the Eastern Conference Semi-Finals. The Capitals lost the series to the New York Rangers 2–1 in overtime in a game 7 at Madison Square Garden.

Following the 2014–15 NHL season Holtby became a restricted free agent under the NHL Collective Bargaining Agreement. The Washington Capitals made him a qualifying offer to retain his NHL rights and, on July 5, 2015, Holtby filed for Salary Arbitration. On July 24, it was announced by the team that Holtby had signed a 5-year, $30.5 million contract. On April 9, 2016, the Capitals defeated the St. Louis Blues 5-1, earning Holtby his 48th win of the season (four of which came via shootouts) and tying him with Martin Brodeur for the most wins in a single season record. He achieved the mark with 66 game starts throughout the 2015–16 NHL season.

Holtby won the Vezina Trophy, awarded to the league's best goaltender, in 2016.

Contact a speaker booking agent to check availability on Braden Holtby and other top speakers and celebrities. 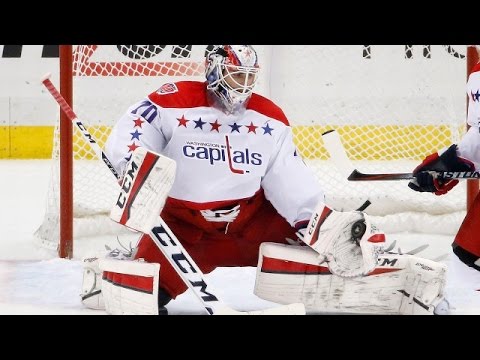 How to book Braden Holtby?

Our booking agents have successfully helped clients around the world secure talent like Braden Holtby for speaking engagements, personal appearances, product endorsements, or corporate entertainment for over 15 years. The team at All American Entertainment represents and listens to the needs of organizations and corporations seeking to hire keynote speakers, celebrities or entertainers. Fill out a booking request form for Braden Holtby, or call our office at 1.800.698.2536 to discuss your upcoming event. One of our experienced agents will be happy to help you get pricing information and check availability for Braden Holtby or any other celebrity of your choice.

How much does it cost to book Braden Holtby?

Booking fees for Braden Holtby, or any other speakers and celebrities, are determined based on a number of factors and may change without notice. Pricing often varies according to the circumstances, including the talent's schedule, market conditions, length of presentation, and the location of the event. Speaker fees listed on this website are intended to serve as a guideline only. In some cases, the actual quote may be above or below the stated range. For the most current fee to hire Braden Holtby, please fill out the booking request form or call our office at 1.800.698.2536 to speak with an experienced booking agent.

Who is the agent for Braden Holtby?

All American Entertainment has successfully secured celebrity talent like Braden Holtby for clients worldwide for more than 15 years. As a full-service talent booking agency, we have access to virtually any speaker or celebrity in the world. Our agents are happy and able to submit an offer to the speaker or celebrity of your choice, letting you benefit from our reputation and long-standing relationships in the industry. Fill out the booking request form or call our office at 1.800.698.2536, and one of our agents will assist you to book Braden Holtby for your next private or corporate function.

All American Speakers is a "buyers agent" and exclusively represents talent buyers, meeting planners and event professionals, who are looking to secure celebrities and speakers for personal appearances, speaking engagements, corporate entertainment, public relations campaigns, commercials, or endorsements. We do not exclusively represent Braden Holtby or claim ourselves as the exclusive booking agency, business manager, publicist, speakers bureau or management for Braden Holtby or any other speaker or celebrity on this website. For more information on how we work and what makes us unique, please read the AAE Advantage.

Braden Holtby is a keynote speaker and industry expert who speaks on a wide range of topics . The estimated speaking fee range to book Braden Holtby for your event is . Braden Holtby generally travels from Washington, DC, USA and can be booked for (private) corporate events, personal appearances, keynote speeches, or other performances. Similar motivational celebrity speakers are Viola Davis, Amy Poehler, Amy Schumer, Rashida Jones and Julia Louis-Dreyfus. Contact All American Speakers for ratings, reviews, videos and information on scheduling Braden Holtby for an upcoming event.

Professional Golfer & Member of the European and PGA Tours

Captain of the Edmonton Oilers