In college basketball, the name Bob Knight is synonymous with greatness and winning. Just take a glance at the Bob Knight file. The numbers and achievements that illustrate what he has done for the game of basketball are there for all to see. Among his numerous achievements:

During his six seasons at Army, his 29 years at Indiana University and his six and a half seasons at the helm of the Texas Tech Red Raider program, he has experienced nothing short of excellence. There are the wins, the conference titles, the national championships and the exemplary graduation rate and player success after basketball. Most telling, there is the bond that exists between Coach Knight and those who have played for him.

Bob Knight is his own man, one who represents high principles, expectations and demands for his players, his coaching staff and, most of all, himself. But he is foremost an educator. His ability to teach young men the game of basketball and the game of life is one of his most noted characteristics. Coach Knight has proven over and over again that he is the finest basketball coach in America. No other coach can cite NCAA and NIT championships and Olympic and Pan American gold medals among his achievements. There are only two coaches in the history of collegiate basketball who have won more than the three national championships Knight has won during his career. His coaching achievements were honored in May of 1991 when he was inducted into the Naismith Memorial Basketball Hall of Fame. In 2011 Knight was voted into the National Collegiate Basketball Hall of Fame.

Committed to mentoring, Coach Knight's coaching techniques and teaching skills place him in great demand as a speaker around the country. High school coaches flock to his clinics and his summer camp for youngsters is always filled to capacity with a waiting list. He has long been active in the National Association of Basketball Coaches, serving in various capacities. He served a term as a trustee of the Naismith Memorial Basketball Hall of Fame and was named an honorary member of Beta Gamma Sigma, the national business honor society. He has also lent his name to help support numerous charitable and youth organizations.

Bob Knight's legacy stretches far beyond the realm of his numerous achievements and highly recognized status on the hard court. In August 2003, he was honored as the first inductee in The Vince Lombardi Titletown Legends. The honor and responsibility pays tribute to those individuals who possess the characteristics instilled by Vince Lombardi in all his players: Dedication, Teamwork, Respect, Love, Family and Discipline.

A native of Orrville, Ohio, Knight is a graduate of Ohio State where he was a member of the Buckeye hardwood teams that won Big Ten titles in 1960, 1961, and 1962 and the NCAA in 1960 while posting an overall record of 78-6. Many of the Big Ten team records that Knight's Indiana teams shattered were those he had a part in making as an OSU player.

After graduating with a degree in History and Government, Knight was an assistant coach at Cuyahoga Falls (Ohio) High School one year before entering the U.S. Army where he was assigned to assist Coach Tates Locke at West Point. When Locke became head coach at Miami (Ohio) University in 1965, Knight, then only 24, was named to succeed him and became the youngest Varsity Coach in major collegiate history.

Bob Knight is the father of two sons. Tim is a 1986 graduate of Stanford University, and Pat, who played for him at Indiana University from 1991-95, is now the head coach at Lamar University. Bob Knight and his wife, Karen, were married in 1988.

Most recently, he served as an analyst for "ESPN College GameDay" and released the book "The Power of Negative Thinking: An Unconventional Approach to Achieving Positive Results," in which Knight explains why "negative thinking" will actually produce more positive results, in sports and in daily life.

Contact a speaker booking agent to check availability on Bob Knight and other top speakers and celebrities. 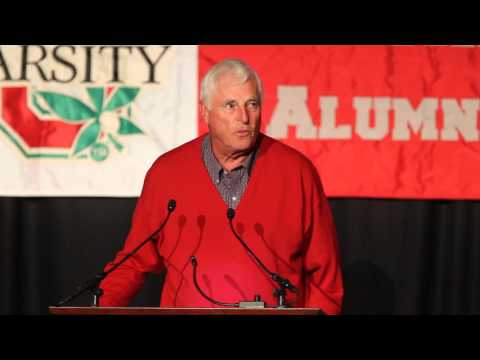 The Power of Negative Thinking: An Unconventional Approach to Achieving Positive Results

How to book Bob Knight?

Our booking agents have successfully helped clients around the world secure talent like Bob Knight for speaking engagements, personal appearances, product endorsements, or corporate entertainment for over 15 years. The team at All American Entertainment represents and listens to the needs of organizations and corporations seeking to hire keynote speakers, celebrities or entertainers. Fill out a booking request form for Bob Knight, or call our office at 1.800.698.2536 to discuss your upcoming event. One of our experienced agents will be happy to help you get pricing information and check availability for Bob Knight or any other celebrity of your choice.

How much does it cost to book Bob Knight?

Booking fees for Bob Knight, or any other speakers and celebrities, are determined based on a number of factors and may change without notice. Pricing often varies according to the circumstances, including the talent's schedule, market conditions, length of presentation, and the location of the event. Speaker fees listed on this website are intended to serve as a guideline only. In some cases, the actual quote may be above or below the stated range. For the most current fee to hire Bob Knight, please fill out the booking request form or call our office at 1.800.698.2536 to speak with an experienced booking agent.

Who is the agent for Bob Knight?

All American Entertainment has successfully secured celebrity talent like Bob Knight for clients worldwide for more than 15 years. As a full-service talent booking agency, we have access to virtually any speaker or celebrity in the world. Our agents are happy and able to submit an offer to the speaker or celebrity of your choice, letting you benefit from our reputation and long-standing relationships in the industry. Fill out the booking request form or call our office at 1.800.698.2536, and one of our agents will assist you to book Bob Knight for your next private or corporate function.

All American Speakers is a "buyers agent" and exclusively represents talent buyers, meeting planners and event professionals, who are looking to secure celebrities and speakers for personal appearances, speaking engagements, corporate entertainment, public relations campaigns, commercials, or endorsements. We do not exclusively represent Bob Knight or claim ourselves as the exclusive booking agency, business manager, publicist, speakers bureau or management for Bob Knight or any other speaker or celebrity on this website. For more information on how we work and what makes us unique, please read the AAE Advantage.

Bob Knight is a keynote speaker and industry expert who speaks on a wide range of topics . The estimated speaking fee range to book Bob Knight for your event is $20,000 - $50,000. Bob Knight generally travels from Texas, USA and can be booked for (private) corporate events, personal appearances, keynote speeches, or other performances. Similar motivational celebrity speakers are Viola Davis, Amy Poehler, Amy Schumer, Rashida Jones and Julia Louis-Dreyfus. Contact All American Speakers for ratings, reviews, videos and information on scheduling Bob Knight for an upcoming event.